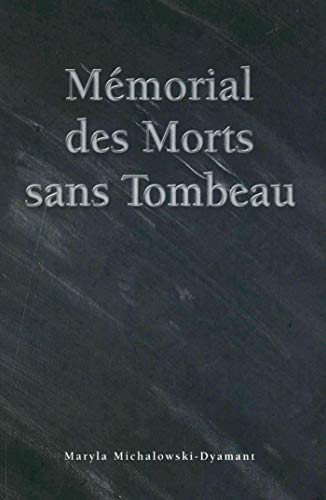 We hope this email finds you well and healthy during these unprecedented times.

First of all, we would like to wish you a happy and healthy new Jewish year!

We also have some exciting news to share with you –

In 2000, Maryla Michalowski-Dyamant (Nana) published her memoir titled Memorial des Morts sans Tombeau (Memorial of the Dead without a Tomb). The book recounts, in the first person, Marlya’s childhood in Poland, her years in the Bedzin Ghetto, her survival in Auschwitz, Ravensbruck and Malchow, and her after-war life in Brussels in great details. It is an extremely gripping read, as well as an important historical document.

Alice Michalowski (Maryla’s daughter) and Serena Dykman (Maryla’s granddaughter) have decided to re-publish the book in e-book and kindle, and each wrote a forward, which re-introduce the book 20 years after its first publication.

The 188-page book is available in French, worldwide on all e-book vendors, such as Amazon and Scribd. Simply google Memorial des Morts sans Tombeau to find an e-book store in your country.

We are working on finding translators to make the book available in English and other languages as well.

A survey came out last week finding that “Almost two-thirds of millennials, Gen Z don’t know that 6 million Jews were killed in the Holocaust, survey finds” (souce and article here).

Maryla spent decades tirelessly recounting the horrors of her past to the youth so it would never be forgotten or repeated. It was her life mission; it was, to her, the reason why she survived.

With our film NANA, our primary mission has always been to make this story of our past accessible and related to all, focusing on education and especially the youth. Serena was in her early twenties when she directed the documentary, and toured middle, high schools and universities with the film for two years, addressing her grandmother’s message against anti-semitism, racism and intolerance to young and diverse audiences throughout North America and Europe.

The DVD can be purchased in North America through Amazon here or directly through our distributor’s website here.

We are excited to announce that we made the award-winning feature animated film Anne Frank’s Diary available for free a few months ago, and the film already received over 2 million views ! It can be watched HERE. The Youtube channel also features the full soundtrack of the film composed by Carine Gutlerner, who also composed and performed the soundtrack for NANA.

« The film has moved me and I want to congratulate [the team] for the high standard and sensibility in producing this film. I am sure it will be successful not only with the young audiences, but also for the elder generations. »

As always, thank you for your support.

Shana Tova to you and your loved ones.