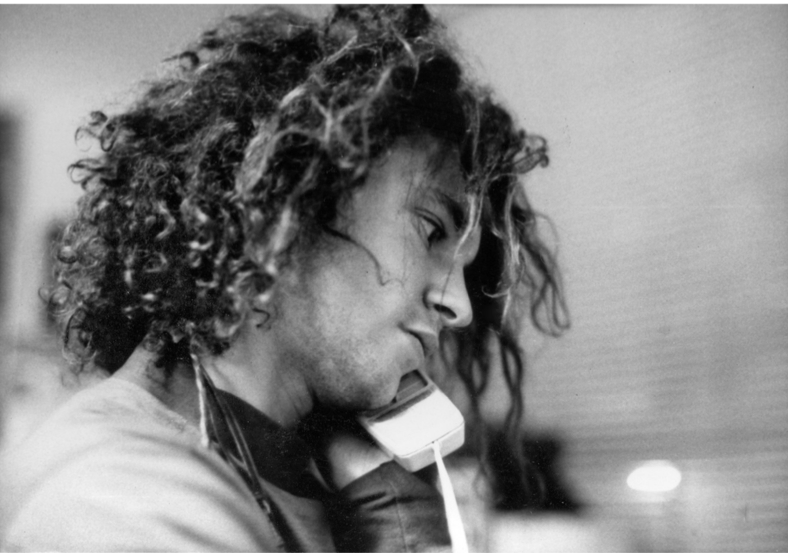 Leith Sun Demon Rogovin was born on April 13, 1969, in Manhattan’s Beth Israel Hospital, exactly a year after his parents met at a ‘Be-In’ in Central Park. It was a very cold winter and spring that year, but on the Easter Sunday he was born the temperature rose into the 60s and the sun shone brightly. God surely warmed the world when he was born. For the first few years Leith lived in Hell’s Kitchen with

his mother, Pam Gross and father, Ira Rogovin. At that time there were many movie theaters on 42nd street, and Pam regularly took Leith to double features. He was only two or three, but he never once cried or interrupted a movie; he was mesmerized by movies and film from that very early age, a passion that lasted and guided him throughout his life.

When he was born, he had two full sets of grandparents, Pam’s parents, Hilda and Bernie Gross and Ira’s parents, Ethel and Murray Rogovin. The grandparents would compete for weekend time with him and he was deeply loved. Leith also had great-grandparents, on his father’s side, Max and Esther. As soon as Leith could talk and hold a phone to his ear, he would call his great grandmother every day when he came home from school and check in with her. Her nickname for him was “Schmooie”.

When Leith was four years old, the family moved to Woodstock, where he attended the School of the New Moon. His heart became rooted in Woodstock at that time, but before long the family moved back to New York City, where Leith, made friends and discovered the world of music. His father Ira shared his passion for Bob Dylan, blues, and jazz with Leith, and those sounds and rhythms spoke to him. In time, Leith’s musical horizons expanded to include hip hop, funk, and most importantly, reggae. The 1979 Peter Tosh show in Central Park sent him into a world of Reggae that fed him with the connection to music and artists and allowed him to explore the deep roots and spirituality the music and culture offered. Leith discovered the vibrant music scene in the Bronx at The Tire Shop, where DJs gathered

and the beats and rhythms of the reggae music drifted through the warehouses and into the city streets of the night. Leith immersed himself in this music that spoke so clearly to his sense of truth and justice and love, and the power of music to heal.

Leith attended public schools in New York City, where he cultivated meaningful lifelong relationships with people of all ages and backgrounds. Later in his high school career, Leith attended Oakwood School in Poughkeepsie, NY. Leith brought his exuberance for life with him, along with a gritty street sense, and a head of curly, long hair. It was at Oakwood where he reacquainted himself with Woodstock, joining friends from school to visit on weekends. Oakwood also inspired Leith with a vision of community service and teaching. His senior year at Oakwood found Leith working at a Head Start program, helping children from disadvantaged backgrounds get early school experiences; it was clear that helping children was in his future.

After high school, Leith entered a film program at Manhattan’s School of Visual Arts, again making friends, sharing his joy of music and life, and engaging people in conversation and his blanket of love and care. It was during this time when Leith began to again immerse himself into the Woodstock community. He and his father rented a house together during the summer months, and before long Leith was a friendly face who would be seen everywhere, smiling, talking, and playing very loud music on his car stereo. He also found his way to Woodstock Day School, working at the summer Arts and Sports Center camp, making short movies with kids, and spreading his message to all who were open to hearing it. Over time, Leith continued to work at the camp, and eventually started working at the school. He wore many hats at Woodstock Day School. He was Advisor to the Senior Class, Community Service Coordinator, College Counselor, Basketball Coach, and, most importantly, the most trusted confidante, ally, and supporter of every child at the school. Always a fan of the underdog, Leith took kids under his wing and taught them how to be strong, brave, confident, and loving people. He always believed in treating even the youngest students with the respect often reserved for adults. When speaking with Leith, it was obvious that he knew you mattered.

One of the many beautiful qualities Leith possessed was that if you met him once, you were his friend forever and he would never lose sight of you. He held close relationships with friends dating back to early childhood and cherished every person he ever met in his heart. Leith was a guiding light in the lives of children. He was a mentor, counselor, teacher, coach, and friend to every child he met. His wisdom and strength, humor and love simply oozed from every pore of his body. Leith changed the world and his love and strength have influenced lives, young and old. Through his more than 20 years of work at Woodstock Day School, Leith affected change. He started a community service program, worked to create an inclusive, loving, and safe environment for students, families, and teachers, and spread the message of love and tenderness at every turn. Leith was masterful at uplifting and unifying people, a complex skill and desperately needed social medicine that he fine-tuned to a science. His brilliant wit, charm, and abundant compassion made for a rarified presence: a true one-of-a-kind – the genuine article. He inspired us to love with abandon, to live fully, to enjoy what we are doing, and to help every person that crosses our paths.

Leith grew up in New York City and, when he was a teenager, spent his summers in Woodstock. The rest is history. Woodstock became his home and heart.

Leith Sun Demon Rogovin, long-time Woodstock resident, teacher, brother, son, and friend, passed peacefully into the next realm in the early morning hours on Saturday, January 9, 2016, after a determined two year fight against brain cancer. He was surrounded by friends and loved ones throughout his short stay in hospice care and is survived by his sister Seana Rogovin, Mother Pam Hott, and Grandmother Ethel Rogovin. Memorial services and celebrations will be planned for this spring.

Your ticket for the LeithofLife.org