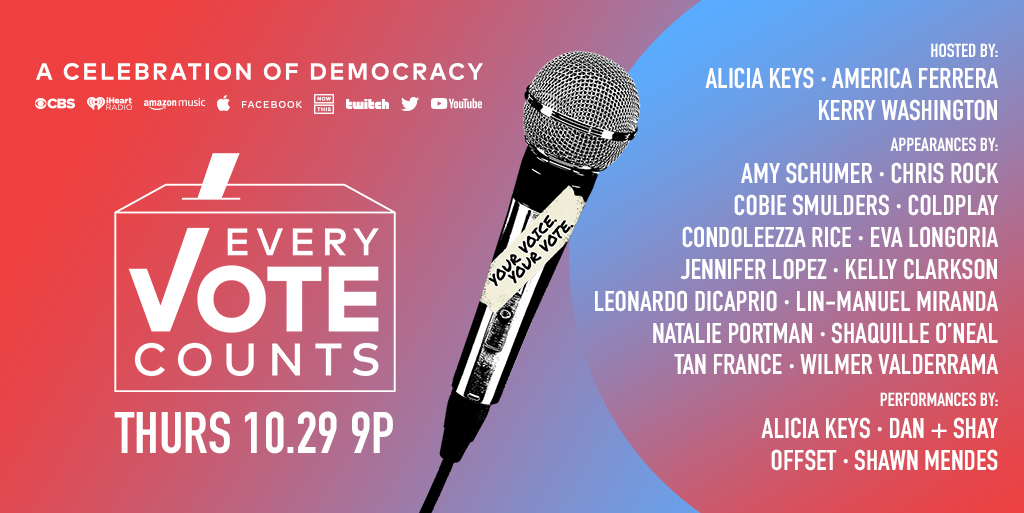 The election is in less than two weeks and to get you ready to vote, we’re excited to announce Every Vote Counts, a celebration of civic engagement and one last push to get everyone to the polls.

Every Vote Counts: A Celebration of Democracy, a nationally televised and streamed event, will air on the CBS Television Network and will be streamed via CBS All Access on Thursday, October 29, 2020 at 9 PM, ET/PT. The special will also be available via the following platforms: iHeartMedia radio stations and app, Apple Music, Apple TV App, Amazon Music, Twitch, NowThis, YouTube, Twitter, TIDAL and Facebook, with more to be announced.

See you next week!

How to Tune In

Artists including Shawn Mendes, Alicia Keys, Leonardo DiCaprio, and more are coming together to empower Americans to make their voices heard in the 2020 election.

Ask an Expert: How Can I Ensure My Mail-In Vote Counts?

HeadCount expert Selam Gashaw has tips on mail-in voting to help you avoid all the pitfalls that may result in an invalid ballot.

15 Inspirational Quotes to Get You Excited About Voting

These encouraging words from stars like Beyoncé, Leonardo DiCaprio, Meghan Markle, and more will inspire you to head to the polls on Election Day.

5 Reasons Election Day Should Be a National Holiday

How to Vote Safely in the 2020 US Presidential Election

This step-by-step guide can help you vote safely amid the ongoing COVID-19 pandemic.

Every Vote Counts — Take the Pledge!

Pledge to vote and help make sure the US election is fair and accurate. Take the Pledge →

Check Out Your State’s Early and Mail-in Voting Options

Many states have made it easier for citizens to vote by mail this year to accommodate for the COVID-19 pandemic. Our partner HeadCount has all the information you need to make your vote count, whether voting early or by mail. Learn More →

Looking For More Ways to Get Involved?

Our friends at HeadCount are organizing sessions to text out the vote. They are hosting two private sessions for Global Citizens to join their peer-to-peer campaign — October 26 and October 31 — sign up for a session and encourage others to vote!