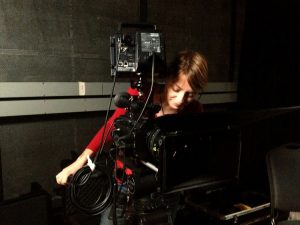 Bio: Director Of Photography Valentina Caniglia, Director Of Photography, has transcended to the highest levels of modern cinema in the craft of cinematography. She is renowned for her distinctive and poised style, nimble and ingenuitive approach and creative dexterity when it comes to execution of her inimitable vision, as she shapes and expresses light, composition and movement. " I am adept at filming each project with a versatile, visual style that best translates each story's unique concept, into breathtaking moving images that unravel the characters' state of mind throughout the progression of the storytelling. Cinematography represents a concept of beauty that stands beyond the aesthetic aspects, something more intense that supports, follows and enhances the story where the camera can capture and show through the eyes and heart of the human's sensitivity behind it, the transparency and the awareness of visuals drawn by the emotions. As a Director of Photography, I always search and find that story to observe and create how I can manifest feelings." Valentina's love of the craft crosses mediums and continents. Her talent and adventurous spirit has taken her across the US, to the Middle East, Europe, Africa, Asia and beyond. She's shot features, shorts, music videos and commercials for a variety of clients including; HBO, Canal Plus, Showtime, RAI, Netflix, Paramount and was Voyage TV's regular DP for whom she filmed underwater cinematography in the Caribbean, Italy, Egypt. Her inventive, gritty edge can be detected in her music video work for The Roots, Aesop Rock, Elen Levon and Amana Melome'. Valentina's also lensed numerous commercials for Pukka, Dove, British Airways, Ford, Nike, Novomatic, Konagi which received the Telly Award. In 2012, Valentina was bestowed the honor to be invited to join the European Federation Cinematographers IMAGO and The Association of Cinematographers (AIC). Valentina Caniglia was recently selected by the ASC vision committee to receive the prestigious ASC Vision Mentorship program. In 2019, she won two Best Cinematography awards for "Little Sicily" and "Fire In Water" and was included in the TeenVogue article among the cinematographers behind some of the biggest movies. Current work: “Barrymore Project” starring Jodie Foster, “3 days Rising” starring Peter Green, Mickey Rourke, Ice-T, “Adieu Lacan” starring David Patrick Kelly "Without Grace" starring Ann Dowd (Two Emmy nominee for The Handmaid's Tale and The Leftovers), Netflix's original series "Gypsy", starring Naomi Watts and Planned Parenthood's UNSTOPPABLE campaign., TV Pilot "The Wohs" with Joseph Sikora (Power) and TV Pilot “Medusa”with Federico Casterlluccio (The Sopranos) Press & Awards; Featured in; TeenVogue, CineFemme, IndieWire, Hollywood Reporters, Variety, The New York Times, The Village Voice, InCamera, La Repubblica, Il Levante, Il Mattino, Elle. Noted in American Cinematographer Magazine for her work on "The Stand", the period piece "Madeline's Oil" which also won the Best Cinematography award at the Louisiana International Film Festival and "Nightmare" Winner of the New York Film Festival. "Pomegranates and Myrrh" starring Hiam Abbass, Yasmine Al Massri, Ali Suliman, Winner of the Golden Dagger for Best Cinematography, premiered in USA at Sundance Film Festival, the film received the Audience Award at Doha Tribeca Film Festival awarded by Robert De Niro. "Fred Won't Move Out" nominated for best cinematography by the AIC IMAGO Award, starring Elliott Gould. Valentina's other work includes the film "Return to Sender", directed by Oscar-winning producer Ravi Malhotra and "Nightmare" Winner of the Chicago and New York Film Festival. The film's cinematography was also the subject of an article featured in American Cinematographer. Valentina contributed her talents as camera operators for the film "Kelly&Cal" starring Juliette Lewis. Valentina speaks English, Italian, Spanish. She holds the US and EU Citizenship.
Request an Introduction