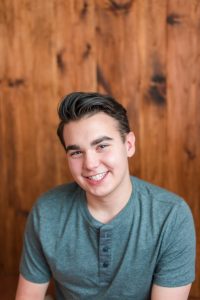 Bio: Tyler McKenzie is a 21 year-old actor and singer from Allentown, Pennsylvania. He has been performing ever since he played a small ensemble role in a community production of "A Christmas Carol" at nine years old! He began taking voice lessons at eleven, and played various lead roles in his high school's theatrical productions. It was around this time that he also fell in love with film acting as he began making short films for his friend's Youtube channel, Bluedog Productions. After graduation he began pursuing a theater degree at DeSales University. While in his first semester he had the chance to work on the film, "Glass" by M. Night Shyamalan, as a stand-in. He subsequently fell in love with working on professional film sets, and the next semester deferred to do some work in San Francisco, where he studied with Shari Carlson and at the San Francisco Acting Academy. He returned to Allentown, changed his major to Finance at DeSales and began studying with teachers Joan Melton and Mary Saunders-Barton from New York City. He worked in a supporting role on the History Channel show, "the Food That Built America" and played the lead role, Jack Kelly, in the musical “Newsies”. In 2020, he worked at Walt Disney World in the brand new, Star Wars-themed land, Galaxy’s Edge, and then returned home and began taking lessons from UK-based acting teacher, Mel Churcher. He also started work on his own short films. He looks forward to working with the Florence-Belsky foundation as mentorship has always been a major part of his life and career. Since high school, he has connected with Broadway and film actors that have guided him along the way. Inspired by this, he made and continues to make an effort to help young performers with their craft.
Request an Introduction