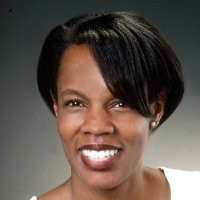 Bio: Theresa Moore is President and Founder of T-Time Productions which develops and produces programming for media platforms including television, film, online/broadband and wireless. Current projects include “License to Thrive: Title IX at 35” (www.licensetothrive.org), a multi-media educational project examining the role of Title IX in creating female leaders, educational programming for use in South African school and documentaries exploring the history of multi-racial adoptions and the history of African-Americans in professional football. Prior to T-Time, Moore was an executive at ESPN doing advertising sales and business affairs for new media platforms. Moore created programming including “The Block Party” which aired for three seasons and “Images in Black and White,” a documentary that aired in 2005. Moore’s work has been considered for Peabody, Sports Emmy, Billie and NAACP Image awards and has been featured on “Good Morning America.” Moore worked at Coca-Cola where she developed and executed strategic marketing and promotional plans for some of the world’s premiere sports properties. She worked at Chubb Insurance as an underwriting manager doing financial and liability analysis and risk management. Moore received her BA from Harvard and her MBA from Emory. She is a graduate of the NAMIC Executive Leadership and Development Program at UCLA’s Anderson Graduate School of Management and completed extensive coursework at NYU. She serves on the Boards of The Harvard Varsity Club, the Opportunity Network and the Ubuntu Education Fund. She is a member of the Visiting Committee for Athletics to the Harvard Board of Overseers. In 2002, she was inducted into the International Scholar Athlete Hall of Fame and was a recipient of the 2005 Harlem YMCA Salute to Black Achievers in Industry award. She was featured on the “Ivy at 50” website and was inducted into the Rhode Island Interscholastic League Athlete Hall of Fame in 2007.
Request an Introduction