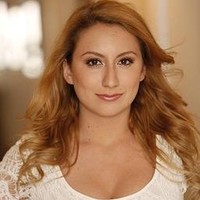 Bio: Serena Dykman is a New York-based filmmaker and graduate from NYU's Tisch School of the Arts Film and Television program. Her work, ranging from comedy to drama and documentary, has won her over 40 awards in the past four years. Her films THE DOORMAN, BED BUGS & COMPANY, and WELCOME have been selected in over 80 film festivals around the world, including at the Cannes Film Festival, and Oscar-qualifying film festivals. WELCOME, a short about U.S. immigration has gotten almost a million views online, and was nominated for a Webby Award in 2020. Serena is a "third-culture kid" born in Paris, and raised between London, Brussels, and New York. Her passion for travel, and cross-cultural issues has informed much of her work. Serena’s first feature film, NANA, which she made when she was 23, is a transgenerational documentary about her grandmother, Maryla Michalowski-Dyamant, an Auschwitz survivor, who was Dr. Mengele’s forced translator, and an activist for tolerance. Serena has been touring the world with NANA, presenting it in film festivals, schools and educational organizations. The award-winning film was chosen by the European Commission and European Jewish Congress to be presented on Holocaust Memorial Day 2018, where Serena participated in a discussion on the future of Holocaust education with the First Vice-President of the European Commission Frans Timmermans and the world-renowned historian and author Sir Simon Schama. NANA was picked up for distribution by First Run Features and released theatrically in April 2018. It is now available on iTunes and Amazon. Serena won the Women eNews “21 leaders in the 21st century” award in May 2018, alongside Abigail Disney, Amy Ferris, and other recipients. She is the founder and president of Dyamant Pictures, a New York-based production company, which produced a publicity campaign for RIVKA.shoes, featuring New York City Ballet principal dancer Joseph Gordon. Serena recently directed a music video for the song Ladies First by MuMu, who wrote the original songs and stars in Best Summer Ever (2020) executive produced by Jamie Lee Curtis and Maggie Gyllenhaal. Serena is currently developing a half-hour dramedy series entitled TIPS, which features actor Ronald Guttman (​Mad Men, Preacher). TIPS is a New York show full of humor, grit and heart about Korean and Chinese immigrants’ experience living the American Dream and the labor conditions they face, told through the day-to-day at a bustling Midtown nail salon. Company Website: www.dyamantpictures.com Welcome short film: www.welcomethemovie.com Nana feature documentary: www.nanafilm.com Directing Reel: www.vimeo.com/serenadykman/reel2019
Request an Introduction