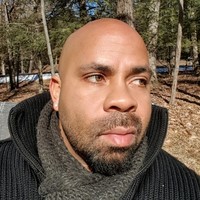 Bio: Saundi Wilson's work in film and television began at age 19, and he has since composed music for A&E, CBS, ABC, and Disney. He would go on to composed the score for the feature film, Manito, which garnered honors at several film festivals, most notably Sundance and South by Southwest. Saundi has also licensed music to hit tv shows such as The CW's Nikita, and BBC's Top Gear. After his graduate study at NYU (where he was awarded Best Original Score- NYU film festival), Saundi began creating The Brüknahm Project with Sebastian Bardin, a former classmate from his undergrad days (S.U.N.Y. Purchase). Their first LP (self-titled) was released on Knitting Factory Records to critical acclaim and has been licensed more than fifteen different television shows including MTV’s Jersey Shore. The Brüknahm Project completed two European tours performing on some of Europe's greatest stages (i.e. North Sea, Jazz a Vienne). After their tremendous success in Europe, the duo packed up and moved to Paris. Brüknahm was commissioned by Universal(France) to produce tracks for Algerian star Khaled, not to mention two remixes for the Japanese sensation AIR on the LP On My Way(EMI/Capitol). Saundi eventually to moved back to the US (LA, then NY), and released his first solo album- "Los Angeles". And he collaborated with Mr.Bardin on Bruknahm's second album- "City of Light". Since he return to the States, Saundi has begun to turn his passion for photography into a career. He has been featured on Sports Illustrated's "Extra Mustard" blog, and has had a photo chosen as a Smithsonian Magazine editor’s pick. He has contributed four cover photos to El Diario la Prensa -the oldest Spanish language newspaper in the country. Saundi's work has also been featured in the NY Photo Festival Capture Brooklyn exhibit at Powerhouse Arena, and most recently at the Sony World Photography Exhibit - the World Photography Organisation selected Saundi’s work from 52,323 images selected from 171 countries.
Request an Introduction