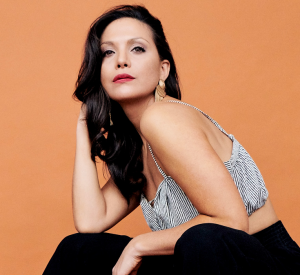 Bio: Rivka Rivera is an actor, writer and producer currently working out of NYC. A Brooklyn native who spent her childhood building forts and writing plays, she became serious about her craft after attending LaGuardia High School of the Performing Arts (the Fame school) – where she received a Drama Desk Award for Performance there. She went on to earn her BFA in theatre from Carnegie Mellon University. Rivka has worked in all theatrical mediums and is a member of SAG/AFTRA. Her work can be seen in movies and TV shows such as “Switched at Birth,” “Circle,” and “Firelight” (ABC) in which she played the supporting lead role opposite Cuba Gooding-Jr. As a playwright, Rivka's one act “Rubble, about a child’s search for her soul amongst a pile of talking trash, has been produced in both LA and NYC. Rivka has a long history as an arts organizer and producer. In 2012 she co-founded and ran Towne Hall, a non-profit warehouse space in downtown Los Angeles, dedicated to providing a community venue for artists of all professional levels and socioeconomic means to create, connect, and share. Rivka’s work also led her to produce several crowd-funding campaigns including “The Skinny” by Jessie Kahnweiler and “Cuddle Party.” Her work on these campaigns was to guide the marketing and structure of the pitch and helped to bring both projects massive financial success. As an arts educator, Rivka worked extensively with the non-profit arts organization STAR Inc.in Los Angeles as a theater teacher. Her work with the youth has always been important to her. She has also taught at the college level, recently being hired as a visiting Professor to teach a workshop on arts and freelancing at The University of Georgia. Since moving back to NYC Rivka has found a home and family at the Irondale Ensemble. Her role with the company has been multi dimensional. As a producer, Rivka has founded and curates the monthly ARTBuffet series, a various variety show. Rivka also Line Produced the"Not Normal" a month of art in resistance and protest against the current administration. Currently Rivka is working on her second round of “To Protect Serve and Understand” a program that brings together NYPD and community members and uses theater and improv to foster communication. Rivka’s primary intention in all of the work she does is to inspire creative inquiry and to shed light on the complex human experience. To check out more of Riv and to watch her reel visit: www.RivkaRivera.com
Request an Introduction