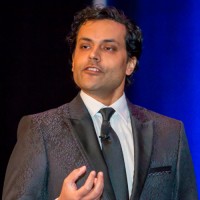 Company: Ravi Unites, Inc.
Bio: Ravi Hutheesing (Rah-vee Hut- ee-sing) is a keynote speaker who builds his brand globally as a cultural-entrepreneur. His philosophies and strategies have helped businesses, educators, and over a million people throughout the Americas, Europe, Middle East, and Asia bridge generational and cultural divides. Additionally, the US Department of State engages Ravi as a cultural diplomat to create programs worldwide that foster cultural exchange and mutual understanding. His worldwide visibility skyrocketed as the guitarist for triple Grammy nominee, Hanson. Their massive fan base of the earliest millennials made them the top-selling band in the world around the turn of the millennium. Ravi has performed on stages that include the White House, Madison Square Garden, Tonight Show, Good Morning America, and Saturday Night Live; authored Dancin' with Hanson (Simon & Schuster) and over a hundred articles for major magazines; and released interactive-video music courses, CDs of original music, and multiple singles. Also an aviator, Ravi discovered that 50% of pilots play a musical instrument. Yet, the aviation industry was not using music to attract millennials and help reverse the shrinking pilot population (millennials prioritize music). "The Raviator" created a niche market within aviation by performing concerts at air shows, becoming the spokesman for products targeting pilots, and developing a signature model folding guitar to fit in small airplanes. As a cultural diplomat, Ravi first went to Russia in 2015 on behalf of the US Department of State and delivered a series of lectures on artist-entrepreneurship and youth leadership. In 2016, he went to Indonesia—the world's largest Muslim population—and created a songwriting camp for millennials from ASEAN nations, showcasing how arts and entrepreneurship can bridge the most severe cultural and religious divides. Ravi conducted songwriting and cultural entrepreneurship programs in 2017 in Iraq which included four students from Mosul—liberated from ISIS just three days before, and Lebanon which included work in Syrian refugee camps. The Department of State also contracted him to be a judge for the prestigious 2017/2018 American Music Abroad program, for which a select group of artists will tour and represent American culture overseas. Currently, he serves as the Director of Youth Engagement and Cultural Entrepreneurship for the Association of American Voices—a non-profit organization that has been conducting cross-cultural engagement with audiences in over 140 nations worldwide and administers some of the most effective cultural diplomacy programs of the US Department of State. Ravi also partners with Shanti Bhavan Children's Project in India, which serves as a home and non-sectarian boarding school providing a holistic upbringing in a high quality educational setting for the poorest of the poor. Given proper care, support, and educational opportunities, these children are able to succeed in life and bring about social change to their communities. Current graduates are employed by American Express, Goldman Sachs, Deloitte, and others, and the school is the subject of the Netflix series, "Daughters of Destiny." The first American born member of India's Nehru-Gandhi family who created and governed the world's largest democracy for over 40 years, Ravi is the grand nephew of Jawaharlal Nehru (India's first Prime Minister), the nephew of Indira Gandhi (India's only female Prime Minister), and the cousin of Rajiv Gandhi (India's youngest Prime Minister).
Request an Introduction