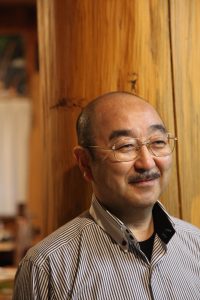 Bio: Purveyor to Japanese Emperor Hashino is a Japan-based renowned wood craftmaster and the President of Artforme. Hashino’s unique and innovative designs are crafted from a rare hardwood tree whose wood has a very beautiful grain and texture. In Japanese this tree, a member of the Birch family, is called “Onoore Kanba”, which means “breaking the hatchet birch”. Hashino's products are made with careful consideration for their materials, shape and function produce a more beautiful and timeless result. Hashino often travels to the United States to introduce his products internationally. More than 30 years ago, Hashino produced his first wooden shoehorn and has been making these beautiful wooden tools with long, smooth carves ever since. In 2005, The Imperial Household Agency brought one of this signature pieces for the Emperor of Japan. Since then, three more sets of Hashino's shoehorns have also been stocked at the prestigious Nara Hotel, where the Emperor regularly stays. In 2012, he featured his products at Cherry Blossom Festival at Sakura Park, and also exhibited at American Craft Show in New York. In 2013, he received the Good Design Award. In 2016, 2017, 2018 and 2019, Hashino received the Gold Award Omotenashi Selection. In 2019, Hashino started to partner with Brooklyn Brewery Japan and produced Wooden Brooklyn Brewery Cups. In October of 2019, being assisted by his international promoter Yohei Suzuki, Hashino has the honor to be featured in the First Mondays/NYC with Japanese Crafts and NYC Craft Beer for Octoberfest. Hashino's products have been recognized internationally. They have been distributed in the United States, Asian and European countries.
Request an Introduction