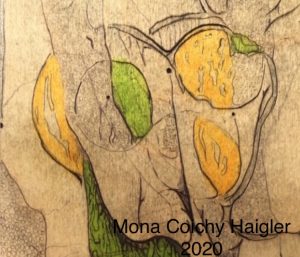 Bio: Mona Coichy Haigler is a creative force that originated in Haiti and landed in New York. Mona has an artistic heritage that has influenced not only her work but also the work of the well known and respected artist, her brother, Jean Richard Coachy. In New York, Mona’s artistic talent has surfaced in numerous ways. She attended The Fashion Institute of Technology and went on to do, not only costume design but also execution of costumes for feature films, designed and crafted exquisite and widely admired jewelry and created acrylic and mixed media paintings that have been in numerous shows and have been acquired by respected collectors including Jeffrey Keil and Finesse Mitchell. Mona, an idealist, believes in giving back and has been a generous contributor of her work to numerous causes.
Request an Introduction