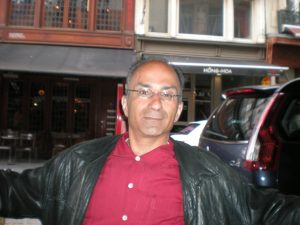 Company: Swiskay Communications
Bio: Born on Long Island, Michael studied politics/economics/business at the University of Pennsylvania. He joined a Hedge-Fund, then quit to pursue an acting career. A “real job” in executive search, more commonly known as “headhunting”, followed. The engagement allowed flexibility to pursue the acting. Soon came a London relocation to build a European business with the acting 'on hold'. After working for some time in recruitment consulting in Europe, he had and recovered from a near death experience in London. Back in the US he returned to acting, performing in Edinburgh during the festival and on New York's theater Row. His artistic focus changed as he began to devote attention to writing for theater and film. Studies in dramatic writing with Robert McKee, Milan Stitt and at the Ensemble Studio Theatre followed. Now he is a writer in residence at the Simon Studio, a member of the American Renaissance Theater Company (aka ARTC-a 40 year old play development workshop), the Independent Feature Project (aka IFP) and the Dramatists Guild. THE MEANING, an autobiographical one act play, the Winner of the Village Gate Festival of One-Act Plays in New York. ORBITING EZMERELDA, (originally titled 'Orbiting Frieda' and rewritten as a feature film script) a play in two acts, chosen Finalist for the Robert J. Pickering Award for Playwriting Excellence and Semi-Finalist in the American Theater Co-Op spring competition. ENTERPRISING, a Finalist in ‘The Movie Deal’ screenplay contest, chosen as the Best dramatic script at the New York International Independent Film & Video Festival and recipient of Honorable Mention at the van Gogh awards of the Amsterdam Film Festival. Most recently, his one-act play, ACROSS, was staged during the Strawberry One-Act Festival in New York, advancing to the Festival Competition second round. BUJAMA DREAMS is a collaborative screenplay written with his nephew.
Request an Introduction