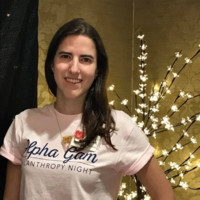 Bio: I am Melanie Peterson, and I would like to tell you a little bit about myself. I am from Greenwich, Connecticut, and went through Greenwich Country Day school (I’m a Lifer there), where I got involved in the band and chorus.. From there, I attended The Masters School for high school, in Dobbs Ferry, New York, where I participated in the music production classes/programs, music theory classes, and glee club, among other things. I am now a rising senior at Belmont University in Nashville, TN. Currently, I am an Entertainment Industry Studies major and Music Business minor. Alongside joining the Theta Tau chapter of the Alpha Gamma Delta international fraternity (I am also a member of their Buff Academic Honor Society), and getting involved in campus through serving on the Community Council of the Russell Hall Dorm Hall, I have also had the opportunity to be a part of the Belmont Showcase Series: I’ve helped on the General Production and Marketing teams for the Urban/Pop and Best of The Best Showcases, as well as my current role of Marketing Director for this coming year’s Battle of The Belmont Bands and Urban/Pop Showcases. Since I’ve been a part of University Singers and Women’s Choir, I was a part of the nationally televised Christmas at Belmont, on PBS. I was also lucky enough to be an extra in country artist Jon Pardi’s new music video for his single, “Dirt on My Boots”, which has over 4 million views, and growing. I am an active member of GrammyU and CMA EDU. Through my major and minor, I have taken classes in topics like, Copyright Law, Music Publishing, Creative Entertainment Technology, Entertainment Economics, Entertainment Distribution and Promotion, Mass Media and Society, and Entertainment Law & Licensing. A close second to music and the entertainment industry for me, is playing sports. I love snowboarding, playing basketball, softball, tennis, and ping pong, among other things.
Request an Introduction