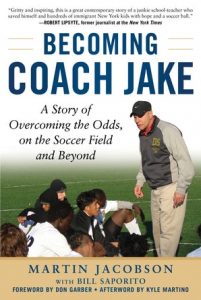 Company: Martin Luther King High School
Bio: A native New Yorker, born in Brooklyn, Coach Jake believes that we are on earth for two reasons; to learn life’s lessons and to help others. Martin Jacobson, a highly successful high school and college player, began coaching in 1968. Working first in New York, and then in Michigan and New Mexico, Coach Jacobson continued to coach and teach in the Public Sector. He pioneered the sport of soccer in the State of New Mexico and was the first Public High School soccer coach in that state. Returning back home in the mid 1980’s, Jake coached at two New York City public high schools, before finding a home at Martin Luther King, Jr., High School in Manhattan. Taking over a team that went winless in 1993, Coach Jake molded a dynasty and a national powerhouse at MLK. Martin Luther King, over the last 20 years, has won the coveted New York City Public High School Championship 18 times. His teams have amassed a record of 490 wins, 21 losses and 10 ties. MLK High School has been nationally ranked (top 20) 9 times over the last two decades. Martin Jacobson is the most winning soccer coach in the history of the New York City Public School Athletic League. His program has a 96% graduation rate and hundreds of players have gone on to numerous colleges and universities, with more than a dozen student athletes going on to the professional ranks. Working with a large, diverse population of young men from around the world, Coach Jake, in collaboration with others, provides social services for the health and well being of his players that goes beyond coaching. His goal is to achieve a better life for each soccer player who comes through the doors of MLK! His book "Becoming Coach Jake" in now available at Simonandschuster.com ( https://www.simonandschuster.com/books/Becoming-Coach-Jake/Martin-Jacobson/9781510742222 ).
Request an Introduction