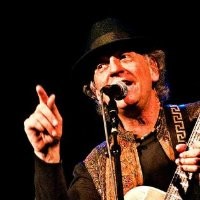 Bio: Marc is one of a very few artists who’s music has found a home both folk and pop radio as well as avant guarde shows like Jonn Schaeffer’s New Sounds on WNYC. He carries on the Woodstock tradition of dealing with social and spiritual challenges…one song at a time. He was a finalist in this year’s Kerrville Folk Festival ‘New Folk’ competition. He also recently won ‘Artist of the Year’ honors from ABC Radio’s Fame Games, the New Jersey Folk Festival and the Austin Songwriters’ competition. His Youtube videos have been viewed as many as 35,000 times. He was a featured performer at the Sundance Film Festival (with Donovan), Levon Helm invited him to perform at one the ‘Rambles’ in Woodstock; and Marc’s song, “Lies in Red, White & Blue” has been as high as #33 on Neil Young’s Living with War’ site. Marc has received the Mobius and the London International Advertising Awards for Best Original Music and has also been noted for songwriting, production and performance by Rolling Stone Magazine, the American Library Association, and Billboard Magazine. He has recorded with an array of luminaries including Taj Mahal, Jack DeJonnette, Rick Danko, PDQ Bach, and Garth Hudson (keyboardist for the ‘Band’); collaborated with Richie Havemoreans on the title cut of the award-winning, American children CD, and the song he wrote for the NY Mets this year was featured on the Diamond Vision screen at the new Stadium. His most recent full CD, Stroke of Genius features a supporting cast that includes Warren Bernhardt, Steve Gadd, Art Garfunkel, John Sebastian, and the Dixie Hummingbirds. The lyrics on this new album are based on the inspired poetry of a man who was in a coma for 21 days and miraculously woke up after his doctors had pulled life support.
Request an Introduction