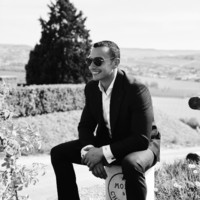 Company: The Vice Wines
Bio: Malek Amrani is an entrepreneur at the helm of The Vice Wine, a wine company operating out of New York and Miami Since its founding in 2016, The Vice Wine has grown into a luxury brand that reflects the values of its founders: quality, sustainability, sophistication, and health A self-made leader in the wine and spirits industry, Malek moved from Morocco to New York City at a young age He got a humble start in hospitality by working as a barback at a local restaurant, and realized he wanted to work his way up the industry. He soon became the beverage director of an upscale restaurant in Manhattan. After a decade as a highly successful wine distributor in the beverage industry, Malek knew what he truly wanted to do: create his own venture and be his own boss. He and his wife Torie Greenberg have since worked tirelessly to build The Vice Wine as the brand of choice for wine diehards and first-timers alike, balancing the classic quality of California vineyards with a current understanding of the consumer’s wine trend. The Vice Wine has produced ten batches so far, some of which have earned acclaim from US Wine Competition, The London Wine Competition and other outlets.
Request an Introduction