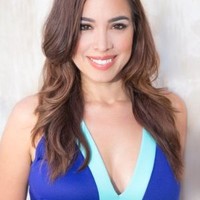 Bio: Jonisha is the proud new CEO and founder of “BLAME IT ON RIOS LIVE!”. She created this company to preserve and promote fresh new theatrical productions that are inspiring, funny, and healing for the soul. Jonisha has been in theatrical and commercial production for over 15 years. It all started with the first one-person show she produced and starred in, “Nude in NY a soul exposed”. This show went on to win The Bronx Council on the Arts award for “Outstanding Solo- Show”. Since then, Jonisha has garnered the “Outstanding actress in a solo-show award”. This production led Jonisha to LA to star in two TV series that are currently on Cable. Her 2nd solo show, “The curse of the Blue Panties”, had its NY premiere in 2008 and it has also been workshopped theatrically in LA. Last year Lionsgate released the first ever Latino Christmas Classic “Feliz Navidad” written by Jonisha. With her first feature under her belt, she learned lots and she is in pre- production for her 2nd feature film for kids. Although Jonisha loves film, her passion is for the stage. Currently, she is most excited about her latest play entitled, “Empowered” . This is Jonisha’s first ever all women- monologue show. She goes into production in NY this fall. Jonisha has coached regular people, as well as celebrities with their solo shows and continues to do so. Blame in on Rios Live INC. is a full-fledged company ready to create a memorable theatrical experience for your next Event. Jonisha also currently co-owner of a second company called “Champions Advertising Agency” formerly “Baez Entertainment”. Jonisha and her husband Michael Baez have joined together to create commercials for small businesses as well as opportunities for new artists.
Request an Introduction