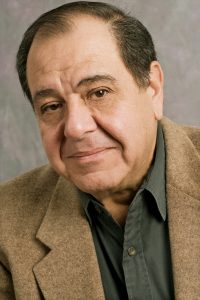 Bio: JOSEPH C. PAPARONE B.A.(Speech and Drama) at the College of New Jersey, NJ 1962 (formerly Trenton State College); M.A. (Speech and Theatre) Montclair State College, NJ 1964: Ph.D.(Theatre and Drama) Indiana University, IN 1977; SUNY– New Paltz Full Professor since 1978-2013. Joe was hired as an Assistant Professor and the Technical Director in the newly formed Department of Theatre Arts for the Fall semester 1970 . Over his 43 years of teaching he taught almost all of the courses in the curriculum except for costume courses (he never understood the magic of the bobbin). He has produced over forty -five productions during fifteen different Summer Repertory Theatre seasons. He has directed more than a dozen Departmental productions and has designed lighting and scenery for several productions. Also, he has acted in various college, community, regional, and professional productions and has appeared in such films as PERFECT STRANGER, ROMANCE & CIGARETTES, ILLUMINATA, LESSER PROPHETS, MEN IN BLACK, NOBODY'S FOOL, ROMEO IS BLEEDING, MR. WONDERFUL, MAC, and MEN OF RESPECT. His Television credits include three episodes of LAW & ORDER, one episode of LAW & ORDER: CRIMINAL INTENT, 3 episodes of ED, and one of FEDS and GUIDING LIGHT. (see professional resume at “www.joepaparone.com.”) His professional credits were prompted by senior theatre students as they approached graduation and pondered on their future. “We feel confident about our study of theatre and acting but how do we find work?”. Those discussions caused him to develop and propose a senior course in 1980, entitled THE BUSINESS OF ACTING, which demanded research of the few personal guides discussing professional standards and eventually a venture into the world of auditioning. He taught that course for over fifteen years (beginning in 1981). In 1988 he signed with the Hartig/Hilepo Agency and began auditioning in NYC and added those experiences to the course. He retired SUNY New Paltz after 43 years on Sept. 1, 2013. He served as a Board Member of MCKENNA PRODUCTIONS, LTD. (a non-profit corporation that produced New Paltz Summer Repertory Theatre and all main stage departmental productions from 1973 thru 2004. Throughout those years and until 2016 MCKENNA PRODUCTIONS, LTD. offered theatre students at SUNY- New Paltz scholarships annually. MCKENNA PRODUCTIONS closed its books and accounts on September 30, 2016. With its remaining funds ($247,000), he established six endowments with the SUNY New Paltz Foundation that will continue the various scholarships to theatre students for years to come. Joe now wants to re-enter the world of auditioning not for the development of a class but for the passion, joy and excitement he experienced.
Request an Introduction