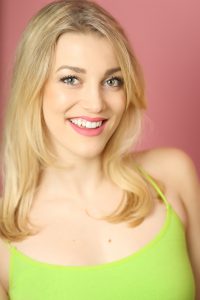 Bio: I am a SAG actress, singer, dancer, comedian (stand up, improv & sketch comedy) based in NYC. While most of my experience has been in musical theater, last week the movie I am featured in, ”The Half of It” premiered on Netflix. I have also been a featured on three seasons on “Saturday Night Live”, and have been featured in “The Marvelous Mrs. Maisel” season 3. I have also been featured in The Good Fight, Evil, Instinct, The Deuce, & several other shows. Theatrically, I most recently played Lauren in Kinky Boots. I have also played Elle Woods in Legally Blonde, Blanche Barrow in Bonnie and Clyde, and Squeaky Fromme in Assassins. I also have a featured extra role in an upcoming Jennifer Lopez film “Marry Me” & 2 other feature films. I have stand-in, modeling, commercial, singing, and voice over experience as well. I am also a writer, and have written 5 commercials for the makeup company “Moodmatcher.”
Request an Introduction