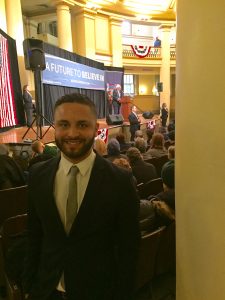 Bio: James Duarte is a cinematic storyteller, creative consultant and political activist born and based in the Bronx. Passionate about the arts, equality and justice, he is driven to fuel creativity and awareness among his peers and audiences. James graduated from the City College of New York with a BFA in Film & Video Production and has produced work that has gone on to screen at venues including the HBO Latino Film Festival, Tribeca Film Festival, Hollywood Shorts and MoMA. During the 2016 presidential primaries James became one of the youngest members of the New York delegation pledged to Bernie Sanders at the Democratic National Convention. James serves as the creative director for the Dominican Film Festival, associate manager for the Ecuadorian Film Festival. James also works for Apple as a creative at the World Trade Center location. He is currently pursuing an MFA in Producing at the Fierstein Graduate School of Cinema.
Request an Introduction