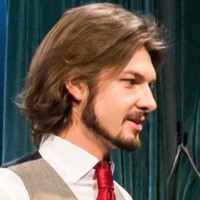 Bio: Jacob Troy is an actor and a filmmaker. He began writing and performing at an early age in his hometown of Woodstock, New York. By age sixteen, a play he co-authored was accepted into the New York International Fringe Festival and featured on CNN. At age eighteen he co-founded the Wayfinder Experience, Inc., a summer camp and an arts-in-education program teaching theater and storytelling to young people, a company that still thrives today. Jacob earned a Bachelor of Arts from Sarah Lawrence College, where he concentrated on Theater and Film. At the Universidad de Sevilla in southern Spain, he studied Art History. As a performer, Jacob has toured the United States with America’s longest-running classical touring company, National Players, bringing Shakespeare to cities around the country, and has performed with regional theater companies throughout the East Coast. In New York City, where he currently resides, Jacob has appeared in numerous Off-Broadway shows throughout Manhattan, and recently co-founded the Off-Off-Broadway ensemble, the American Bard Theater Company. As a filmmaker Jacob has been in the roles of either writer, director, or producer for his own films as well as the work of others. Recently, he returned from Patagonia, Argentina where he appeared as a lead role in The Son of Tango Kid, a new independent film, which he also co- wrote. Other experience includes working for several years in the financial sector as a Wall Street recruiter and as a fundraiser, helping to raise $15M for and an online executive recruiting start-up with such clients as The Blackstone Group, Deutsche Bank, and Goldman Sachs. Additionally, Jacob has more than ten years experience as a teacher and workshop leader, having taught people of all ages in more than thirty states around the country.
Request an Introduction