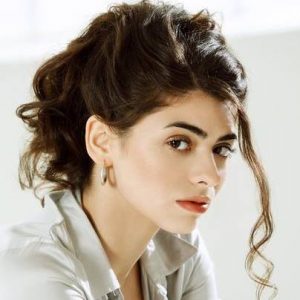 Bio: Born in New York and raised in central New Jersey, Jackie Paladino is a singer-songwriter whose voice has been compared to the likes of Amy Winehouse, Billie Holiday, and Adele. She was introduced to the piano at the age of six, and developed her understanding of storytelling and performance through musical vocational school. It wasn't until Jackie returned to her birth state to attend the music theatre program at NYU's Tisch School of the Arts that she discovered her true calling. "When everyone else was memorizing lines to songs and stories, I was writing my own stories through song, belting out the tunes of Etta James, Duffy, and Regina Spektor along the way." Always an avid reader of poetry, she found herself delving deeply into the works of Leonard Cohen and Fiona Apple, entranced by the precision and mystery of their word choice. As an artist, Ms. Paladino seeks to combine this sense of lyric perfectionism and her urgency to "mold the ugly into something beautiful" along with the power and soul of her favorite songstresses. Ms. Paladino believes we have a responsibility to share our God-given talents with the world, and that with this lens, the art she creates is less of a choice than a calling. Jackie has recently worked with vocal coach Don Lawrence (Lady Gaga, Christina Aguilera), producers Chris Griffin (Madonna, John Legend), Grammy nominated producer Ivan Corraliza (Timbaland, Christina Aguilera), and Grammy award winning producer Tyrone Corbett. Ms. Paladino has been featured in Buzzfeed, Paste Magazine, Impose Magazine, Ethnocloud, Vents Magazine, Boy Meets Girl, Exposed Magazine, amongst others, and has performed at the United Nations, Knitting Factory, BBKings, and World Café Live, just to name a few. She has released music via indie labels, although her most recent release, a collaboration with South African Sony/ATV artist Gino Lee was via ONErpm. Ms. Paladino is also an actress, currently working with Aspire Talent Management and Stefanie Talent and Entertainment. She made her Off-Broadway debut as Wendla Bergmann in Spring’s Awakening at the tender age of 17, performed the lead role in her second off-broadway show, “A Family Christmas Reunion”, last winter, played a supporting role on the TV show “Tricked”, and a supporting role, Aradia, in a $40k feature film, “Lea”, scheduled to release this year. Jackie is also a model signed to MMG Model, Talent, and Celebrity Management, and was most recently seen in a Vodka Commercial. Her poetry can be seen in Harness Magazine and via her blog, and her original acting material can be found via Stonestreet Studios. Feel free to find out more at Jackie-Paladino.com.
Request an Introduction