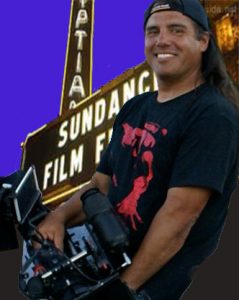 Bio: Jack Kohler is a member of the Hoopa Valley Tribe. He has been the media teacher for a tribal school in Auburn, CA for the past 13 years. He teaches music, drama, theater, film and traditional songs. Before that he worked for the American Indian Film Institute mentoring students on reservations and rancherias on how to make films. Jack graduated from Stanford University with a Civil Engineering degree. He was also on the Stanford Marching band and Lacrosse team. He became a member of the Actor’s Equity and SAG in the 90’s. He was the lead in the AEA production of “Tecumseh” for 5 summers before he began producing documentaries. He won the Eagle Spirit award from the American Indian Film Festival in 2006. He co-produced “California’s Lost Tribes” which was aired nationally on PBS and which received a CINE Award in 2006. He produced “River of Renewal” which won Best Documentary Feature at the American Indian Film Festival and Native Film and Video Festival, which has aired over 2000 times on PBS stations nationwide. Jack's created an original series "On Native Ground - Youth Reports" which began airing on the FNX channel in 2012 and is currently broadcast 2 - 3 times a week. The show highlights native role models and offers native youth a place to become broadcast journalists. As credentialed press at the Sundance Film Festival for the past 9 years, Jack has brought young broadcast journalists to the festival to conduct interviews with the indigenous film makers for vignettes on the series. That series has won the Native American Journalist Association Award of Excellence, in the professional Division III for Television programing for the last 4 years. Jack’s short narrative film, about the gold rush, “K’ina kil” has now screened in film festivals around the world and has won 3 awards. It is currently on FNX, NativeFlix, Roku, XERB and TribalTV. Jack created a Children’s Television Pilot “The Land of Little Big” which was completed in 2017 and features Little Big Foot. Also a new feature documentary “Once We Had A River” is available. Jack’s latest production is a Native Rock Opera titled “Something Inside Is Broken” that premiered in 2016 and was performed in 3 states on ten stages. It is the first Native American Rock Opera written and composed about California Native History. It uses both the Nisenan and English languages to tell of the historical accounts of Sutter, Captain Fremont, Kit Carson and the Nisenan tribe. A video version is currently available for screening on Vimeo. Jack completed a voice over narration for “The Seven Generations River” for Detroit PBS in 2019. Currently Jack is working on a PSA for the Missing & Murdered Indigenous Women. In October, Jack will help produce and cast a Native American Horror film “Intrepidus” for a young Director/Writer he once mentored, who is now a Senior at the Dodge Film School at Chapman University. Jack is also producing a film he co-wrote called “Red Road to Nirvana” being directed by Don Most and starring Justin Rain, Riddhi Sen, Michael Horse, Gil Birmingham and Gary Farmer.
Request an Introduction