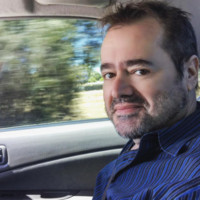 Bio: Hayden Black, hailing from Manchester, England, now makes his home in Los Angeles. He's the award-winning actor/writer/producer of Goodnight Burbank ("Better than 99% of the stuff on TV" – USA Today"), the first-ever scripted half-hour comedy made for the web as well as the first-ever half-hour comedy to go from the web to TV as it was licensed – the day it premiered on Hulu - by Mark Cuban for his cable channel HDNet. Goodnight Burbank and his other original online work - including Abigail's Teen Diary & The Occulterers - have won or been nominated for Webbys, iTunes and Yahoo awards, has been viewed in the multi-millions, and is being taught and referenced in college courses around the world. The press has dubbed him a "web sensation" (LA Times), "ridiculously funny" (Time Out) and "one of Internet comedy's brightest stars" (The Guardian). Hayden's a proficient tweeter with over 27,000 followers at http://www.twitter.com/haydenblack and has been reprinted on the home pages of the New York Times, CNN, Time Magazine, Hollywood Reporter, etc. Hayden's also starred in the web drama "Chasing The Hill" alongside Richard Schiff; contributed to a book entitled "Behind The Sofa; Celebrity Memories of Dr. Who", named by Amazon UK, one of its "Ten Best Books of 2013"; became a regular on-air contributor to BBC America's TV series "The Brit List" and was the writer/Voice Over for Yahoo's hugely popular daily web series "Who Knew?" He's also written for the UK's Channel 4 show "Mashed:2013", a sketch-based show focusing on the year's major headlines. Hayden has keynoted and/or given speeches at various events, from Digital Hollywood to NATPE. He comes from a hugely successful marketing background, having produced award-winning On-Air promos for all of the major networks (ABC, NBC, CBS, Fox). He's repped by Cheng Caplan Company.
Request an Introduction