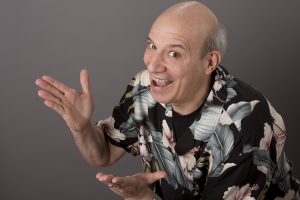 Bio: Glenn J. Cohen is an accomplished professional actor with over thirty years’ experience performing on stage with the likes of Cherry Jones, Tony Shalhoub and Stubby Kaye. He is a member in good standing of SAG-AFTRA and AEA. A member of the National Honor Society, Glenn earned a Bachelor of Arts Degree in Theatre from the University of Massachusetts at Amherst. Prior to becoming a New Yorker, Glenn taught Improvisational Theatre in the Boston Public School System, but he is best known for his work as a “Method Extra” in over 300 movies. As a joke, Glenn performed his first set of Stand Up Comedy in 1978 at Boston’s Comedy Connection at the Charles Playhouse. He moved to New York City in 1983 and soon thereafter became involved with a very talented troupe of improvisational comedians. Glenn then spent a few years thrilling audiences with his Stand Up Comedy at the “Original Improvisation.” He has also penned the comedy screenplay “New Amsterdam” which he hopes someday will be produced. Glenn is currently performing Stand Up Comedy at various venues around the New York area and despite the adversity, Glenn still hopes to fulfill his lifelong ambition of becoming a child star.
Request an Introduction