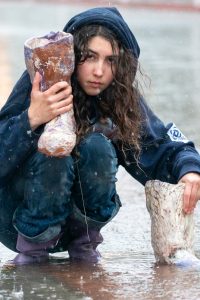 Bio: Born in Manhattan (2000), Gabrielle Shira Broome is a multidisciplinary visual artist working in ceramic, papier mâche, painting, projections, photo, and video. Within her practice, she creates worlds informed by spirituality, sensuality and anger. Her work is shadowed by whispers of violence as she sources imagery from childhood memory, biblical imagery and Jewish mysticism. After high school, she lived in Jerusalem for ten months: traveling around Israel, studying Kabbalah, and experiencing the magic of ceramics under the mentorship of Anna Carmi. The spirituality that revealed itself to her in Jerusalem appears within her image making. During high school she participated in programs at NYU and Cooper Union. Through gold medals she received from the Scholastic Art and Writing awards, her artwork was shown at the Metropolitan Museum of Art, and within the Art.Write.Now national tour. She was also a recipient of the New York Life scholarship and a YoungArts Alumni. She currently is based in Los Angeles where she is a rising sophomore at the University of Southern California to which she was granted a Trustee Scholarship. She has worked in the past as a children’s creative writing mentor, as a teen liaison in the Guggenheim, as a teaching assistant at the Brooklyn Museum, as a class monitor at the Art Students League, as a projects and photo intern at CITYArts along with various other roles. She has participated in various live performance art events as well as virtual zoom performance art. During quarantine she began hosting, “Virtual TeaParties” which are biweekly zoom meetings for fellow creatives as an informal space to discuss and share journal art and poetry. You can see some of her art on her instagram page- @gabrielleshiira.
Request an Introduction