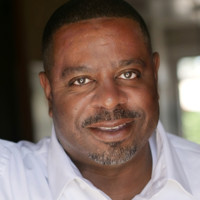 Bio: G.L. McQueary is an Aeronautical Science Major who began acting in 1986 as a member of the New Jersey based theatre group the Phoenix Ensemble, where he performed in nearly two dozen stage productions. In 1992 he landed his first professional theatrical role in the Capital Repertory’s (Albany, NY) production of the award winning play “The Gang on the Roof” and 1993 he toured the country staring in the gospel musical A Mother’s Love. In 1994 G.L. arrived in California were he immediately landed a role with the Morgan-Wixxon Theatre in Santa Monica Ca. in their production of A Raison In The Sun where he was nominate for a Geoffrey Award. G.L. went on to perform in a host of commercials, sort and feature films. In 2005 G.L. won the Outstanding Actor/Comedian Award by the Global Art Film Festival Tour for his roll as Slappy Johnson in the comedy Rib Shack. As a writer G.L. adds Poetry, Stage plays as well as television and film scripts to his credits. His play Momma’s Porch has been running for five consecutive years through out the state of Georgia, with plans to start a second production to run in New Jersey in 2012. Currently G.L. is writing the first two episodes for a new television drama for the New Jersey based L.A.W. Productions.
Request an Introduction