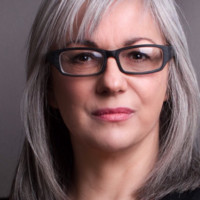 Bio: Francesca Rizzo is an award-winning multi-media artist working in video, film, theater, publishing, fine arts and social media. She specializes in creating media content, marketing, programming and building communities for commercial, social or artistic purposes. By combining her above-ground background in PR, advertising & marketing with her experience in indie filmmaking, experimental theatre and avant-garde works she’s been able to produce polished, entertaining & informative media that is provocative, funny and highly imaginative. Last year she picked up Digital Storytelling while earning a BA in Media Arts and garnered the SUNY Chancellor’s Award for Excellence along the way. For 14 years she was the CEO of MovieBaby Productions, Inc. a Tribeca- based independent film & video company that created award-winning short films and marketing videos as well as campaigns for MTV, Nickelodeon, Bravo and PBS. She went on to design and head up The CineSalon, a series of video production workshops and film study programs offered through universities, cultural arts organizations and other educational institutions. During her term as president of the CineWomen NY (now merged with NYWIFT), she re-branded the organization and introduced it’s first website, e-newsletter, member weblist, screening series, affiliate relationships and festival participation which resulted in quintupling the organization’s membership. In the 90ʹ′s, she has championed films made by and about women into producing female-themed screening events & symposiums including Beyond The Babe: Writing Women Who Rock and The World According to Girls in Manhattan and, in recent years she has programmed the Cinema-Femina film/video series at New Jersey’s premier Union County Performing Arts Center. Francesca is looking to channel her passion and skills into a full-time executive position where she can create media content, program, brand and market a social business. She possesses highly effective traditional PR skills and is equally equipped to create top-notch ad campaigns, materials, video, podcasts, websites and blogs all in-house.
Request an Introduction