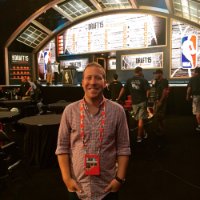 Bio: Ethan Asofsky is a Content Associate in event production at ESPN in Bristol, CT. He is currently specifically focused on creating ancillary video packages for Big Ten basketball game telecasts and will, once again, be a major contributor on ESPN's NBA Draft coverage in 2016. During the 2015 NBA Draft, Ethan was responsible for negotiating, acquiring and producing all international player footage. Over the last three years, Ethan has emerged as a leader in the Content Associates Program, which is designed to train the next generation of ESPN producers. He’s consistently produced exceptional work, whether it’s crafting the lead highlight on the highest-rated SportsCenter, cutting montages for NFL Live and NFL Insiders or producing play breakdowns for on-air analysts. Ethan went to Undergrad at the University of Illinois with an emphasis on news-editorial journalism. He served as an associate beat reporter for MLB.com for two seasons, covering the Yankees, Mets, Cubs and White Sox in the New York and Chicago markets. He was a regular contributor in the clubhouse and during press conferences and would write feature, game recap and daily notes stories on a deadline rivaling those of the major New York and Chicago newspapers. Ethan has a passion for media, sports and entertainment and is looking to continue to grow within the industry.
Request an Introduction