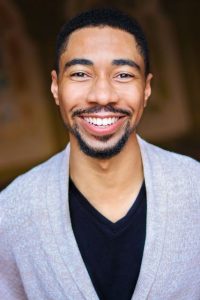 Bio: Darin F. Earl II (he/him/his & they/them/theirs) is a Garden State native, delighted to contribute to the beautiful culture in NJ. With a background in theatre and journalism, he has nestled into communities, fostering environments of support and collaboration amongst artists as an actor, playwright, teaching artist, and arts administrator. Darin attended Rider University for Theatre Performance along with studies in Journalism, emerging as the only Black Theatre Performance graduate in the Class of 2016. As a First-Generation, Queer artist, Darin has made an effort to lead with love and create with care since stepping foot into the Jersey scene. He has been involved with theatre organizations such as The NJ PlayLab, The New Jersey Creative Arts Collaborative, New Jersey Repertory Theatre, The Shakespeare Theatre of New Jersey, Luna Stage, Writers Theatre of New Jersey, and Dreamcatcher Repertory Theatre. As one of Newark's Finest Ambassadors, he's performed since his youth, attending the Newark Boys Chorus School in Newark, NJ. Since then, he's performed on stages from Upstate New York down to the Cayman Islands and over to Croatia. In 2014, he attended St. Mary's University of Twickenham in England, UK and in 2017, he traveled with his alma mater to perform in the International Student Dionysian Festival in Đakovo, Croatia. He has also travelled to Los Angeles, California and Charlotte, North Carolina for featured roles in filmed series. With momentum for development, production, and direction, Darin co-founded Visions Productions and North Corner Theatre, two production companies with the intent to assemble an artist collective dedicated to fostering artistic opportunities for our youth. In 2019, Darin was the Interim Director of Education for Writers Theatre of New Jersey. Presently, Darin works in digital media as a webcast production assistant for a corporate creative studio. Aside from his involvement in the artistic community, Darin is an advocate for the Queer community as a member of Beta Gamma Chi Fraternity, Inc. He also is an administrator at HPI School of Allied Health, and a registered pharmacy technician. To follow Darin's journey, follow him on Instagram: @OfficialDarinEarl.
Request an Introduction