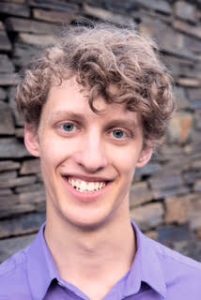 Bio: Tenor Christopher Sokołowski is a native of New York’s Hudson Valley, and has performed a wide repertoire of both concert and operatic works, ranging from Purcell, to Poulenc, to Phan. In the summer of 2015 he sang the role of Henrick Egerman in Sondheim's A Little Night Music with the Phoenicia International Festival of the Voice, sharing the stage with highly acclaimed artists such as Ron Raines, Rosalind Elias, and Susan Powell. Earlier in the year brought two Handel works: the title role in Acis and Galatea with the IU Summer Music festival, and Oronte in Handel’s Alcina at the Indiana University Opera Theater, directed by Chas Rader-Shieber and conducted by Arthur Fagen. In November of 2014 he had the honor of performing as the tenor soloist for Britten’s War Requiem conducted by Michael Palmer, which served as a campus-wide commemoration of the centennial of World War I at Indiana University. February of 2014 brought the world premiere of P.Q. Phan’s Tale of Lady Thị Kính with the IU Opera Theater, directed by Vince Liotta and conducted by David Effron, in which he created the role of Thiện Sĩ. In concert he has performed with orchestras and ensembles across America in works such as Orff's Carmina Burana, Vaughan William’s On Wenlock Edge, Handel’s Messiah and Alexander’s Feast, the Magnificats of J.S. Bach, J.C. Bach, and Vivaldi, Mendelssohn’s Elijah, Mozart’s Requiem, Vivaldi’s Dixit Dominus, and Handel’s Esther, among others. In the summer of 2013, he was an artist with the Lyric Opera Studio of Weimar, Germany, where he performed the role of Tamino (Die Zauberflöte), and sang with the Thüringer Symphoniker under the baton of Oliver Weder. Other performed operatic roles include Alfred (Die Fledermaus), Le Mari (Les mamelles de Tirésias), and Remendado (Carmen). He has been a featured artist with the Phoenicia International Festival of the Voice for several summers, covering tenor Barry Banks in the role of Don Ottavio (Don Giovanni), and singing in their concert dedicated to young “Voices of Distinction,” in which he shared the stage with Brian Asawa for a concert of repertoire from the Baroque and Renaissance periods. In November of 2014, he was awarded the Albert Rees Davis Scholarship as a winner of the S. Livingston Mather Scholarship Competition, and in 2015 he was a semifinalist for the Lyndon Woodside Oratorio-Solo Competition, was awarded the Bizet Award in the Orpheus Vocal Competition, and placed third in the American Prize College/University Opera division. He earned his Bachelor of Music degree, magna cum laude, from SUNY Purchase, and his Master of Music degree from Indiana University’s Jacobs School of Music where he was an associate instructor of voice. During his studies, he has participated in masterclasses led by tenor Matthew Polenzani, countertenor Daniel Taylor, soprano Josefien Stoppelenburg, tenor Emilio Pons, and baritone Damon Nestor Ploumis. www.christophersokolowski.com
Request an Introduction