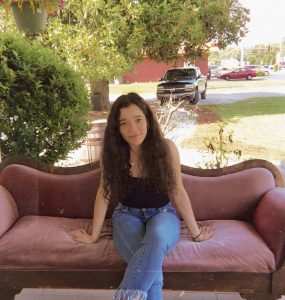 Bio: My name is Arlyn Brown, I’m an 18 year-old musician, singer-songwriter, activist, and Student. I am currently a freshman at Sarah Lawrence College studying Public Policy and Sociology with plans of pursuing a career in politics and music. On February 14, 2018 I released my first original song, “Let It Go” onto all streaming platforms which garnered more than fifty-two thousand streams on SoundCloud alone and received more than twenty-two thousand streams on Spotify. My debut EP entitled Moments is my upcoming project which will be released by the end of 2020. I am currently working toward sustaining an independent music career supported by my mentors and I will be releasing many songs in the future. My discography is available via. My Linktree at, https://linktr.ee/arlynbrownmusic . In 2018 I was an intern on the Congressional Campaign of Elaine Luria, who ran in Virginia’s second district. While working on her grassroots campaign, my passion for politics developed and I went on to become co-founder and chapter leads of March for Our Lives South Hampton Roads and of the Students Demand Action chapter of South Hampton Roads. My work there let me to participate in the Students Gun Violence Summit in Washington, D.C. where I helped draft a Students Bill of Rights with gun violence survivors, activists, and with the leaders of the March for Our Lives group. In addition to my work in local politics and music, during my high school education, I studied at the Governor’s School for the Arts, a premier Arts school in Norfolk, Virginia majoring in dance. While attending, I studied ballet and modern dance and had the opportunity to perform with the Richmond Ballet, The Royal Winnipeg Ballet, and the Richard Alston Dance Company. Above all, my love for songwriting and music production is what means the most to me and I am elated to begin my career in music and to meet the incredible creatives who are part of the Florence Belsky Foundation.
Request an Introduction