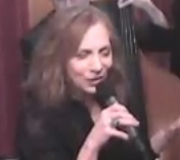 Bio: “An audacious artist [who] flouts genre limitations, delivering an inventive, thrilling, appealing musical vision,” vocalist Andrea Wolper works “in a milieu that begins with jazz and reaches out to embrace an expressive area that is uniquely her own.” As accomplished with jazz standards as she is with unusual repertoire, experimental music, and spontaneous improvisation, Andrea has been described as both " utterly original" and " a singer with an uncanny emotional touch for the past 50 years of jazz.” One of the "great jazz singers" included in " The Jazz Singers: The Ultimate Guide” (Yannow, BackBeat Books), Andrea has also made her mark as a composer and arranger. Cadence Magazine calls her songwriting “easily superior,” and she has been awarded a number of composing residencies. In addition to leading her own musical projects, Andrea has worked as a side-person for an impressive roster of musicians including Jay Clayton, Will Connell, Bob Gluck, Vinny Golia, The Heavenly Big Band, Patricia Nicholson Parker, and William Parker (including appearing on his recordings, “Voices Fall From the Sky” and the historic “Migration of Silence Into and Out of the Tone World”). She was a founding member of the free improvisation trio TranceFormation with pianist Connie Crothers and bassist Ken Filiano. Andrea sings in her New York home-base and tours in the U.S. and beyond. Performance highlights include the Blue Note, Dizzy’s Club Coca Cola (Jazz at Lincoln Center), Mezzrow, Edgefest (Ann Arbor, MI), Sons d’Hiver Festival (Paris), South African Broadcast Center Concert Hall, JazzFest Kassel (Germany), the Outpost (Albuquerque, NM), and many more. Her recordings as leader, co-leader, and side person have appeared on a number of Best- of-Year lists. These include her third CD as leader, “Parallel Lives” (Jazzed Media); “TranceFormation in Concert” (New Artist Records); and Parker’s “Migration of Silence” (Aum Fidelity). Andrea is also a writer whose journalism and poetry have appeared in numerous publications. Among her works are two books, including the groundbreaking collection, “Women’s Rights, Human Rights: International Feminist Perspectives” (ed. with Julie S. Peters; Routledge). She served on the board of directors of International Women in Jazz, including a stint as president, and as an advisor to the Jazz Vocal Coalition. Andrea teaches vocal technique and coaches singers in her private studio, and teaches clinics and master classes in vocal performance, improvisation, songwriting, and more at schools including the California Jazz Conservatory. (Quotes: Blogcritics, International Review of Music, All About Jazz, Tucson Citizen, Cadence). www.andreawolper.com
Request an Introduction