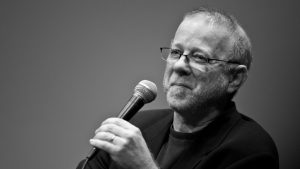 Bio: Alan Berliner's uncanny ability to combine experimental cinema, artistic purpose, and popular appeal in compelling film essays made him one of America's most acclaimed independent filmmakers. The New York Times described Berliner's work as "powerful, compelling and bittersweet... full of juicy conflict and contradiction, innovative in their cinematic technique, unpredictable in their structures... Alan Berliner illustrates the power of fine art to transform life." Berliner's films, First Cousin Once Removed (2012), Wide Awake (2006), The Sweetest Sound (2001), Nobody’s Business (1996), Intimate Stranger (1991), and The Family Album (1986), have been broadcast all over the world and received awards at major festivals. His films are part of the core curriculum for documentary filmmaking and film history classes and are in many permanent collections. In 2013, Berliner was awarded the “Freedom of Expression Award” by the San Francisco Jewish Film Festival. In 2006, the International Documentary Association honored him with an “International Trailblazer Award.” In 1993, he received a Distinguished Achievement Award from the IDA and in 2002, the National Foundation for Jewish Culture presented him with a Cultural Achievement Award. He was the recipient of a “Storyteller Award” from the Taos Talking Picture Film Festival in 2001. Berliner is a recipient of Rockefeller, Guggenheim, and Jerome Foundation Fellowships and multiple grants from the NEA, NYSCA, and NYFA. He’s won three Emmy Awards and received six Emmy nominations. Berliner has exhibited a substantial body of photographic, audio and interactive video installations. In addition to conducting master classes around the world, Berliner has been an Adjunct Professor at The New School, NYU, and SVA In New York City. His courses reflect his ongoing dedication to exploring (and pushing) the boundaries of innovative storytelling. Berliner was born in Brooklyn, raised in Queens, and lives in Manhattan with his wife Shari and son, Eli.
Request an Introduction